What’s the quickest way to deliver your content to a multinational audience? – This maybe one of the most efficient ways I’ve seen.

While monitoring the Twitter stream this morning from various motor-sports journalists covering the build up to this weekend’s Formula One Spanish Grand Prix there were several enthusiastic posts about a little piece of plastic.

This piece of plastic, distributed by Porsche.

“I remember the era of 100-page media guides. Look at this slick modern version from Porsche.”

While NBC Sports’s Will Buxton added a few more details.

Globalized, smart, slick, and in keeping with the brand. Delivering content to a well-defined community in the way that works best for them. – Brilliant piece of content marketing.

From a marketing perspective it’s also interesting to note that Porsche aren’t even competing in the main GP event. They don’t have an F1 team, nor do they supply engines anymore. They do however have supply all the cars for one of the, normally ignored, supporting events – yet they got a sizable share of the journalists’ attention and social media buzz this morning. 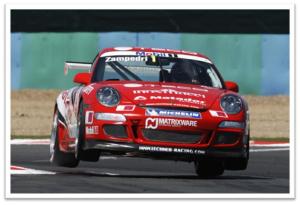 And I found out that the British refer to QR Codes as BeeTags – apparently named after a popular QR Code generation software.  – This plays to a conversation I had at the STC Conference in Atlanta last week discussing the fact that just because something is written in English, it doesn’t mean it is equally understood in all English speaking markets. – Maybe that’s a subject for another blog post.